New Karolinska Solna, NKS, is part of the Region Stockholm’s future health plan, implemented to meet the needs of the future and continue to provide good care to patients.

The “Region Stockholm healthcare future plan” involves major efforts on more care, better premises and new forms of cooperation. Below is an overview of costs for NKS. The agreement extends to 2040. Naturally, it is not possible to accurately state how costs will look over the next 25 years, as this is influenced by, for example, population development and possible changes in care needs.

The cost to build New Karolinska was agreed at 14.5 billion SEK, since the project is financed through a PPP agreement this was a fixed cost throughout the construction period.

The plans for future health care have evolved since the PPP agreement was signed. Therefore, the county council has made a number of additional orders. Among other things, it has been decided on an extension of the treatment building with 80 care facilities and a patient preparation kitchen. The cost of the supplementary agreements amounts to a total of SEK 1.7 billion.
The supplementary agreements are financed within the framework of the investment budget decided by the county council.

Other construction investments linked to the NKS project, in addition to what is included in the PPP agreement, amounts to SEK 2.3 billion. This is for example to refurbish some of the existing buildings at Karolinska University Hospital, Solna, as the thoracic building and Astrid Lindgren’s children’s hospital. This is done in order for buildings to maintain a modern standard and continue to be part of Karolinska University Hospital Solna.

In addition to the PPP construction costs, the Region also budgeted for costs to procure and install medical equipment and information technology. These include imaging equipment and operating equipment and the hospital’s IT system. Since the construction period is long (2010-2018) and the technical development is fast, the county council quickly elected when the PPP agreement was concluded to procure the equipment to the hospital separately, to access the latest technology at the best possible price. In total, the cost of equipment for Nya Karolinska Solna is estimated at SEK 4.3 billion.

The concession period for the PPP agreement runs until 2040. In addition to construction costs, the agreement includes operations, maintenance and financing as well as hospital services, such as soft and hard Facilities Management. This means that according to the PPP agreement, the county council will in total have paid SEK 52.2 billion, including construction costs of SEK 14.5 billion, by the year 2040. With the additional medical equipment, supplementary orders and other construction investments, the total amount until 2040 will be approximately SEK 61 billion.

Below is a description of the project parties that have existed since signing the contract for NKS. 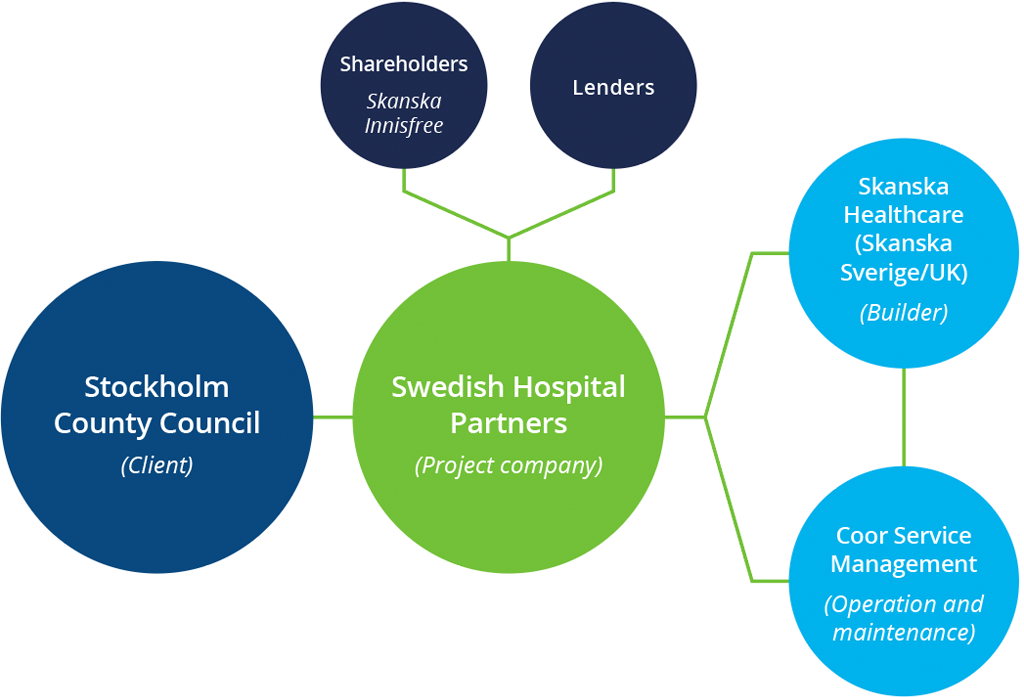